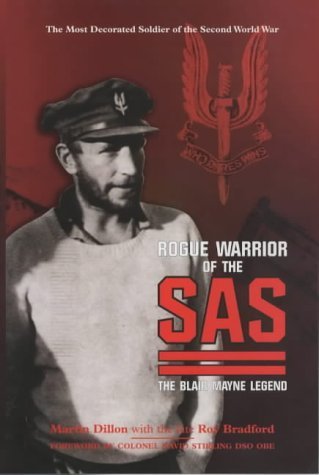 click here to buy Rogue Warrior of the SAS

Rogue Warrior of the SAS: The Blair Mayne Legend

Rogue Warrior of the SAS: The Blair Mayne Legend
Half a century after his death, Lt. Col. Robert Blair Mayne, of the British Special Air Service, is still regarded as one of the greatest soldiers in the history of military special operations. This book tells the story of his unbelievable feats of heroism and highly unorthodox tactics that made him the most decorated British Soldier of the Second World War. It also delves into his conflicted personal life. While there was talk of a lost love, he never married and some of his contemporaries felts that his resentment of gays in the military reflected his concerns about his own sexuality. The book draws on personal and family papers, secret files and Official SAS wartime Diary. A picture emerges of a flawed but unquestionably brilliant soldier. The foreword to the book was written by the late Col. David Stirling, founder of the SAS.