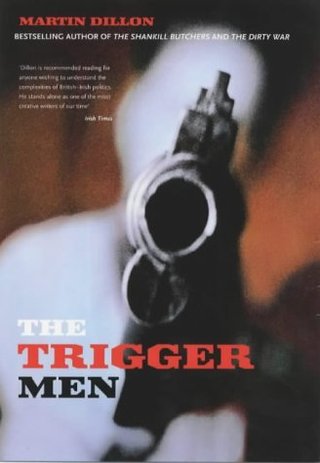 ‘When I first met Dominic Mc Glinchey, he looked impressive. He was six feet tall and lean, with a receding hairline. In his 30s, his slightly rounded face gave him the look of a much younger man. In no way did he resemble the crazed psychopath staring out from the headlines of British tabloid newspapers. The press had used archetypal arrest photos, which made every suspect resemble an unshaven maniac. In the reflex news coverage of the Troubles, his tabloid sobriquet, “Mad Dog”, which he found slightly amusing, provided exciting copy and led to a tendency to blame Mc Glinchey for every atrocity. However, he was a man who struck fear in his associates as well as his enemies. There was not a scintilla of guilt when he publicly admitted that he was a trigger man. Like so many terrorists I interviewed, he portrayed himself as an ideologue who never murdered innocent people. That was not how he was perceived within the security forces on both sides of the Irish border or by the families of those he killed with a clinical ferocity. He had many vicious idiosyncrasies, one of which was that when he pulled a trigger he preferred to be close and personal to a victim. He said that for him it was the most effective way to kill because he was not a trained marksman. It was a curious, if not self-serving way of portraying himself as a cool, cold-blooded assassin. It neatly fitted his profile of judge and executioner. Dominic Mc Glinchey’s mirrored that of many young men of his generation who found themselves attracted to violence, often as a consequence of events outside their control and not because of a driving ideological commitment.’

‘John Mc Keague was lean, sleazy and snake-like, his eyes slightly sunken. When he spoke, the menace was wrapped in slyness but there was no missing his capacity for sadism. It was not apparent to the UVF that by 1971 he had become an intelligence asset, providing information to Special Branch officers about other loyalists……In 1972 they handed him over to British Military Intelligence handlers. He was a practiced manipulator and the young thugs under his control were sometimes targets of his sexual appetite. However, all of them were directed to commit hideous murders... William Mc Grath, another pederast, was a British Intelligence agent from the 1950s onwards. Like Mc Keague, he sought out young men and boys, often using his religious ministry as a cover for his sexual proclivities. His connection to Mc Keague was through their shared, insatiable pedophile leanings and both knew Sir. Knox Cunningham and other leading Unionist homosexuals. Collectively, they were part of what today would be called a pedophile ring. While researching my book God and the Gun, I spoke to a source about this ‘ring’ and he explained that there were several Boys’ Homes in Northern Ireland from which boys were picked up and taken to parties in Brighton, England. Mc Grath, unlike Mc Keague, had protection from the British Intelligence community before the Troubles began in earnest. As my source said, “top hats and royalty”, meaning the English upper classes and people connected to the Royal Family, were part of a wider homosexual ring in which Mc Grath was an integral player.’