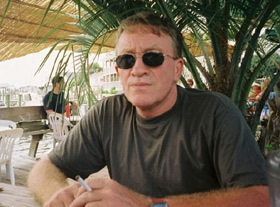 The Irish Times has described Martin Dillon as ‘standing alone as one of the most creative writers of our time’. Born in Belfast, he wrote his first book Political Murder in Northern Ireland, a Penguin Special Edition, while he was a newspaper reporter. He distinguished himself in print journalism before joining the British Broadcasting Corporation as a news reporter and later program editor. While with the BBC for eighteen years, he created award-winning programs and also wrote plays for radio and television. His unique, investigative reporting won him international acclaim and he is considered one of the foremost experts on global terrorism and organized crime. His bestselling trilogy, The Shankill Butchers, The Dirty War and God and the Gun from his non-fiction works, is regarded as the definitive account of the Ireland conflict. After leaving the BBC’s history department Timewatch, he became a terrorism expert for news outlets on Sky Television and Channel Four a role he subsequently went on to fill with US and Canadian radio and television news networks. He has also been featured on CNN and NBC.

His contacts within US and Eastern European intelligence services make him one of the best informed writers on the subject. The writer and historian, Conor Cruise O’Brien made the following observations about him: ‘As a writer, Martin Dillon possesses a quality which was commended by Albert Camus: “the reserve that befits a good witness”. He has no axe to grind; he follows the evidence as far as it takes him and he acknowledges that, the evidence does not permit of more than an open verdict. Those who know Martin Dillon know well he will never distort what anyone says to him in order to build up some kind of case to support a theory or assumption. This well-established reputation has greatly assisted him in the pursuit of his enquiries. He is our Virgil to that inferno in all the varieties of its torments.” In 1992, after threats to his life from terrorists, Martin Dillon moved to England and then to France where he spent six years writing books and contributing articles on terrorism to news outlets. In January 1998, he settled in New York where he now lives with his wife, Violeta Kumurdjieva, a Bulgarian journalist.

Aside from his non-fiction works, he has written screenplays and two novels, one of them The Serpent’s Tail with a storyline rooted in the Ireland conflict. A screenplay based on that novel won a European Script Fund Award. He continues to give interviews about terrorism to radio and television networks worldwide and is finalizing a new work, Stones Don’t Die .