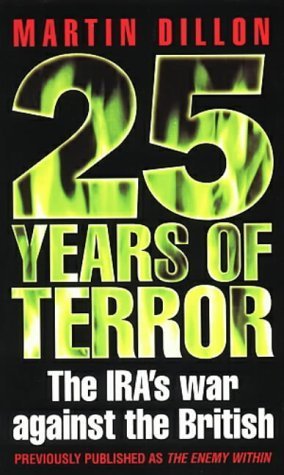 Twenty-Five Years of Terror: The IRA's War Against the British

Twenty-Five Years of Terror: The IRA's War Against the British

This is the first objective and comprehensive survey of the IRA in Britain. It examines the bombing campaign in Britain before and after the Second World War; the IRA's flirtation with Nazism and Eire's wartime neutrality, and how that conditioned British policy towards Ireland; and the bombing campaigns of the 1970s and 80s. Described as 'a remarkable study', it provides evidence of political and military mistakes which made British cities the most vulnerable in Europe to attack.

Sunday Telegraph, UK: 'Dillon's account if packed with new information and should be required reading. It is a serious study, well researched and competently written'.


Daily Mail, UK: This is the only clear account of the history of the IRA's bloody activities in Britain since the 1930s. It draws links between the IRA and the Nazis and unashamedly portrays that connection. It also unravels how IRA cells infiltrated Britain from the 1970s onwards'.